Last night at our council meeting a group of residents from a neighborhood in our community expressed their strong dissatisfaction with the revisions to the “Brush Pick-Up” program during public participation.  To summarize, their neighborhood is filled with trees (more than most) and, as a result, it is impossible for them to comply with the parameters set in our current program.


As I have said in public and on social media posts and comments, the new guidelines came about after several public meetings that included our Public Works Director detailing the many problems with the program as it existed.  I won’t go over them all again here, but there were many valid concerns that needed to be addressed in order to preserve this service to the residents.  Unfortunately, I don’t think there were more than one or two residents that attended the public council meetings.  And, judging by the amount of calls and emails I have received since we started enforcing the program a month ago, many residents failed to visit our website for the information, read the notice that was included in everyone’s tax bill or read the multiple newspaper articles and social media postings on the changes.  The frustration is shared on both sides because “reaching” residents that don’t want to or are too busy to be reached becomes problematic.  Important community information is not getting to people who need it the most.  Of course, we can’t knock on everyone’s door and have an individual conversation about the program.  And in all honesty, I believe the Town did enough to get the word out.  And those that are violating the ordinance now receive a “notice” explaining why and offering a time-frame to remedy the violation.


The phone calls and emails I have received for the most part have to do with an individual’s unique situation that rationalizes why they can’t comply with the new standards.   Some are legitimate and most are more that they can comply but it would be easier not to comply.  The communications with these residents are challenging because they, for the most part, aren’t very concerned about the big picture or how laws can’t be tailored to an individual’s specific circumstance.   They pay taxes, and they don’t want to be restricted on when and how they dispose of their brush onto the street.  This becomes a tough situation to address individually.


The Public Works Director, the Council Members and I all try to make the best decisions for the greatest number of residents.  Receiving community feedback at a time when council members are making decisions is critical to crafting laws that so directly affect residents.  I do understand the disappointment, frustration and anger residents feel that something they had provided to them and had enjoyed (as a convenience) for so long now is reduced in scope requiring them to adjust.   But, just as important, is our (PW Director, Council Members and myself) ability and willingness to listen to the feedback and complaints no matter that they come after the fact.  Laws are fluid, and can be adjusted.


Since we began enforcement of the new program, I have met with our PW Director and the Code Enforcement Officer on multiple occasions to determine what difficulties the residents are facing in complying with the new standards.  Some of the more recurring complaints are:  (1) The time requirement of putting brush out the weekend before pick up of their zone (because it is not always convenient or possible); 2) The height (3ft) and length (12ft) of the piles poses problems for those who have larger lots or more trees; and 3) the location where they discard the brush when it is unsafe or inconvenient to place it in front of their home.


We knew there would be pushback from some residents, and for sure that has happened by a small but vocal group.  I am told approximately 8 years ago the Town tried enforcement of the brush program but the outrage from residents prompted the effort to be abandoned.  This program cannot continue without a determined effort by the Town to enforce the regulations and the residents to have a willingness to abide by them.  But as important, we have to be open to adjustments to the program to better serve the residents.  And we are.  Public discussions will take place to consider amending the “Brush Pick-Up” program to address some of the major concerns.


We will be considering larger brush piles (maybe for the initial zone pick up); extending the time-frame from the weekend before zone pick to the week before; and separating the restrictions of brush pick-up from our leaf pick up program; and possibly reducing the brush pick-up season because we somehow must address and reduce the cost to the Town in terms of manpower, equipment and disposal of the excess brush, and we must maintain our streets in a condition that is safe for pedestrians and cyclists who cross and use our roads.  We simply can’t go back to how it was, but we can always be open to adjusting the program when reasonableness and necessity exist.  Stay tuned (seriously, try to stay tuned….) communication is a two-way street.


And I will end with this by telling those who attended the meeting, my apologies to you all when my emotion got the better of me at times.  I am human.  It’s been relentless hearing disparaging comments from members of my community over the past month.  Throw in some difficult things occurring in my life recently, and I performed in a manner that was unacceptable.  You all deserve better.  One of the reasons that I post on social media and make comments about community issues is to let everyone know that township employees (including myself) are human beings dealing with the same life issues as everyone else.  Insults and disparaging comments do hurt (I admit it).  I know I am expected, in fact it is demanded, that I am to remain unemotional and professional at all times when I am acting as the Municipal Manager for the Township of Lawrence.  I will try my best and will always be a work in progress……………..  And I am aware that this is “smushy” but I don’t care.  I am just being real.   #LawrenceNJStrong! 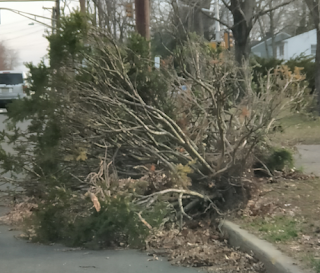 My Deepest Apologies to Rich and Frankie and their families.

On the front page of the Trentonian newspaper today there was an extremely odd and poorly written article that was intended solely to dispar...

Kevin
So this is me.....Married to Judy since 1989. Father to Jakob age 24 and Sara age 20. Raised in Lawrence Township, NJ and attended Eldridge Park Elementary School, St. Ann Grammar School, Notre Dame HS, and received a BA (History, Political Science) from Rider College (now University) in 1988 and a Juris Doctor from Temple University Beasley School of Law in 1994. I am presently the Municipal Manager for Lawrence Township. Over the past 24 years, I have also served as it's Municipal Prosecutor, Municipal Attorney and Municipal Judge. I have also practiced law in this community for the past 25 years helping many residents navigate through their legal issues along the way. I reside in Lawrence with my family. I love the Oakland Raiders (I have my reasons), the beautiful game of soccer, and working around the house because it makes my wife happy! Lawrence Township is in my DNA, and I am committed to doing my best for it always. I may stumble along the way, but it will not be from a lack of good intentions or effort. PS My profile picture is 10 years old so I will appear older in person...